WHERE TICS AND COMPULSIONS MEET: TS PLUS OCD

WHERE TICS AND COMPULSIONS MEET: TS PLUS OCD 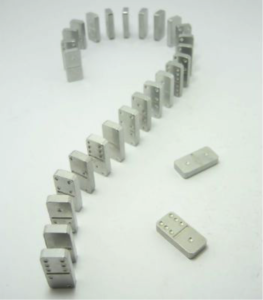 Tourette Syndrome and Obsessive Compulsive Disorder often occur together.  In fact, the Centers of Disease Control and Prevention states that more than one third of persons with Tourette Syndrome also have Obsessive Compulsive Disorder.  Often tics and compulsions can look similar and be difficult to distinguish.  Actually, to an observer it may be impossible to determine whether a behaviour is a compulsion or a tic without asking the person performing the behaviour, and even then it may remain a mystery.

The key to distinguishing a tic from a compulsion is the motivation behind the act.  As an example, lets break down a simple motor tic which could very well be a simple compulsive behaviour .

The behaviour is blowing on the back of the right hand.

If the behaviour is a tic the person may feel a premonitory urge to perform the tic.  The premonitory urge could be a tickle on the hand, a sensation in the elbow joint prompting the movement, a sensation in the lips to purse, a feeling in the chest prompting a need to exhale a breath.  Premonitory sensations may be any feeling or urge that prompts the tic, creating the itch that needs to be scratched.  The person scratches that itch and the tic is performed.

As you see from this scenario, the behaviour from the outside observer is identical.  To the person, the behaviour may be triggered from and performed for very different reasons.  It could also be that the person themselves may be unaware of the difference as well.  Distinguishing the “why” the behaviour occurs requires some cognitive awareness, maturity and insight.  A child, for example, may not be able to determine the “why” and just know that they have to do the act.  A person with many tics and compulsions may have a low reserve of mental energy to distinguish the “why” of the behaviour.  A person who has little understanding or insight about their differences may also be unable to articulate whether they are compelled due to anxiety to perform the act or if the act is a sudden, intermittent, unpredictable, repetitive, non-rhythmic movement that is classified as a tic. 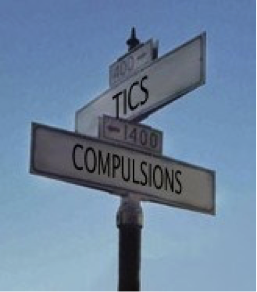 Now let’s throw more uncertainty into the simple blowing on the back of the right hand.  Perhaps this tic or compulsion is linked with another behaviour.

For example, the person has established that the blowing on the back of the right hand is a tic but immediately after performing the tic they are compelled to do it over until it feels just right.  Now the behaviour may be motivated by anxiety and the following act is a compulsion.  So the person blows on the back of the hand twice, once performing a tic, the second time due to a compulsion but both times in the exact same way. Alternatively, it may be the opposite, where the initial act is a compulsion which then triggers the tic.

To make it more confusing, it may not be the exact same behaviour, it may be any other tic or compulsion. For example, the person may be compelled to jiggle the door handle to make sure it is locked and then perform a tic by knocking on the door. The combinations may be endless and the compulsions and tics may interact in very intricate ways.

So why may it important to distinguish a tic from a compulsion?

Sometimes it may not be. If the tic or compulsion is not intrusive, disruptive or bothersome to the person performing it, then knowing the motivation for the behaviour may not be important to them.  If the person is bothered by the act, motivation is important in terms of modifying or extinguishing the behaviour.

Tics may be treated or modified using Cognitive Behavioural Intervention for Tics, (CBIT).

Both of these therapies require gaining insight about the motivation that drives the behaviour and thus determining whether it is a tic or a compulsion.  The insight lays the groundwork for the appropriate behavioural intervention. But, not only is knowledge and understanding important for therapy, it helps us to better understand who we are, how our brains work and why we do what we do which will contribute to our overall self-awareness and emotional well-being.

Here is a short example of tics and compulsions interacting….

For information how Tics and Compulsions manifest in Coprolalia see:  Coprolalia Part 1:  The Nature of Coprolalia

Our New Normal: Parenting Our Child with Tourette Syndrome, ADHD, OCD,ODD Emotional Dysregulation – Just like Regular Kids but “Only More So!